Greetings to all present here. I request you all to bear with me as I present in front of you my speech on the topic ‘Annual sports day’. I urge you to pardon me for any mistake that I commit knowingly or unknowingly while presenting my thoughts.

Annual sports day is the time when sports and games are given importance in an educational institution. It is the time when the sportsmen and women are brought to light. It is the specific span of time in the academic calendars that are set apart for exercises, games and other recreational activities.

This event occurs annually in every school, but preparations for it start a month before. Annual sports day is the time when students get a break from the regular monotonicity of studies and can indulge themselves in doing what they enjoy most. There are a variety of events that are suitable for every child. Any child can participate in any event that he thinks is best for him.

In my school too, annual sports day is celebrated with great preparations and pomp and show. The practices for March past and drill started a month before. Every day the end periods were dedicated for its practice when the entire school used to come out for practice, from children to higher secondary students.

The students who weren’t good at this were chosen and taken out and sent for other works like singing and dancing groups. These were the performance groups. These groups performed specific dances and there was a chorus group who sang the school theme song, some prayer songs and national anthem.

The hosts and event conductors were told to fix up their speeches and vote of thanks. This was where I worked. Since I had a good voice I was selected to be the event conductor. The one who will give the real time cover up of the entire event in the mic. 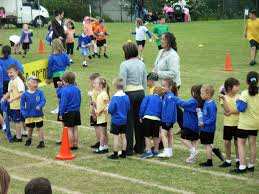 Since different events will be going on in different parts of the school sports ground. My duty was to keeps news of every game, know their scores, and keep the audience updated with it and about the progress of the game. The rest of the coordinators readied their speech by taking help of the teachers.

Then there was time for the different competitions and a rough selection of the participants. There were so many game events and races. There were 100 meter race, 200 meter race, 400 meter race, relay race, sack race, rabbit race, biscuit race, three-legged race, marble and spoon race and many more.

During the rough selection the best participants were chosen and rest were thrown out of the game. Then there were also some non-racing games like the cricket ball throw, discus throw, iron ball throw, long jump and such. These games also had their rough selections.

Another group of students were appointed to be the volunteers, one who will look after the discipline and proper order of the entire event. Some were appointed to write the certificates and participate in the prize distribution ceremony.

Games like football and basketball were also to be held. But those were supposed to be inter school. Hence the practices for them were done separately.

On the day of the event the chief guest arrived. They lit the torch and the torch was encircled around the entire sports field by the four house captains indicating the start of the game. Then the national anthem was sung and flag was hoisted. This was followed by a speech, a dance performance.

Then it was followed by the March past. The chorus song team members put on a song. Later in the day started the individual sports and games. There was a break in between of one hour, allowing the participants the time to recharge themselves and have their food.

Then again in second half the games started and the team events like the foot ball and basketball. I had a hard time walking around with a mic from this field to that announcing the scores. I had to make sure that none of the events went neglected. The inter school teams also arrived.

They were welcomed by our teachers and students with a food packets and flowers. The inter school matches began. But unfortunately, our school didn’t play well in the football match. But in the basketball tournament is stood the first. All the students were happy

When all the events were over it was time for the prize distribution ceremony. The torch was extinguished at the end of the event. I never expected that the day would go so well and that annual sports of my school would be such an enjoyable event.

It not only brought out the hidden talents in each one but also provided fun on the way. This shows how important games and sports are in an academic regime.