India is known for its cultural heritage in the whole world. In fact it is India which has given the world the gift of art. The firs art work which belongs to Paleolithic culture of the Stone Age was found in India only. The presence of these paintings has asserted India’s importance for art and culture in the whole world.

The stone sculptures during the reign of Maurayas have been found in Pataliputra. Pataliputra was the then capital of Mauraya Empire. The king Ashoka was a disciple of Buddhism.

He had helped in constructing beautiful large stupas at the key sites of Lord Buddha. Our national symbol is also taken from the very famous Pillar of Ashoka. The famous pillar having four lions is the national emblem of India. Several other artifacts have also been found during archeological excavations. 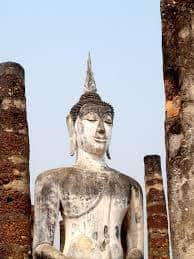 The major survival of Buddhist art is found in places like Sanchi, Bharhut and Amaravati. The artifacts belonging to this period are either at sites. Some of them are also housed at museums or different places in the world.

Mathura is also a religious hot-spot for various religions- Buddha, Hindu as well as Jains. It has beautiful free-standing Viharas and Chaitya prayer halls. They are made up of wood and are not found elsewhere in the world.

The world famous caves of Ajanta, Karle and Bhaja have some iconic wall sculptures. They are sculptures of Buddha and Bodhisattvas.

Later Jain and Hindus also followed this tradition of Buddhist art and sculpture. They took their inspiration from Buddha’s art. With the conquest of Alexander, this art had reached to all north-west part of India. This included Gandhara or modern day Afghanistan and Pakistan.

This period is regarded as ‘golden age’ of Hinduism. But, still only the religious works of this age have survived. There were two great centers of sculptures- one is Mathura and the other is Gandhara.

Large sculptures of Hindu deities and Jain tirthankaras are found at these places.

It is known as the shore temple. This age has so many temples that India feels proud of its heritage.  UNESCO has recognized several sites as heritage sites. For e.g. the rock cut temples of Pattadakal, Badami, Aihole etc.

It is a UNESCO World Heritage Site. The temples of Khajuraho were built by Chandela clan of Rajput dynasties. These temples  depict the religious side of people. But they also show the every-day socio-cultural activities through the means of sculptures.

These sculptures date back to medieval period. These temples are also famous for the explicit figures of sculptures. They depict a side of human being which was and is considered a taboo in society till date.

These temples were very well maintained. They were used for worship and rituals till 13th century. That’s why quite a lot of ruins still remains which show the grandeur and magnificence of these temples.

Reign of Mughals and Rajput’s

Emperor Humayun was the first Mughal emperor who patronage art in his kingdom. He had two very fine painters named Mir Sayyid Ali and Abd al-Samad of Persia in his court. Akbar succeeded this tradition too. Akbar also had patrons of art in his court. He appreciated several painters, singers, artists and dancers in his court. He rewarded several Persian artists for their contribution to art.

You can view the merger of Persian art with Hindu traditional sculptures. It is evident in the various places built during this period. Akbarnama written by Abul Fazal had several miniature paintings. All types of paintings and art flourished during this period.

It did not matter from which region or style it belonged. It could be pahari styles, or Rajput paintings or Persian miniatures. The succeeding ruler Jahangir also followed his father’s footsteps. But in a different manner. He preferred uplifting each painter rather than the collaborated work of painters.

Several renowned painters had flourished and gained popularity and momentum in this period. Some of the contemporaries were Bishan das, Manohar das, abu al Hasan. Govardhan stc. Later Shahjahan played the key role in the construction of a lot many sculpture. He provided us the seventh world of Earth the Taj Mahal, a memorial of love. The Mughal patronage of art died in the reign of fanatic ruler Aurangzeb.

Rajput’s too patronage art in their courts and kingdom. They encouraged miniature court- style art Rajput paintings. These paintings show the religious beliefs about Hinduism. They depict the life of Lord Krishna and Lord Rama. The painters of this period used mineral colors and plant colors in their paintings.

It is the Deccan which steals the limelight of Indian sculpture. It has the most embellished, renowned and unique sculptures. Whether it is the Ajanta and Ellora caves or the temples of Mahabalipuram; all are unique in their styles.