The UNESCO World Heritage site Agra Fort holds a renowned place in the Indian History with various anecdotes adorning its own history.

It is said that the 5th Mughal ruler Shah Jahan was imprisoned by his fanatic son Aurangzeb in this very tower where he died of a broken heart.

Shah Jahan was rumoured to have been kept in a locked room high up in one of the towers facing the Taj Mahal– the monument he built in the loving memory of his wife Mumtaz and her last resting place- but his view was obstructed.

Only with the help of a small mirror could he see the reflection of the tomb filtering in through the only high window in the room and afford peace to his yearning heart.

The fort is also rumoured to have been the site of the legendary ‘Kohinoor’ diamond, which was studded in the famous Peacock throne built in the throne room of the Fort.

Historians might not have proof of such occurrences in the fort but they can mark the dates of other important events regarding the mighty Agra Fort.

Agra Fort, also called the Red Fort of Agra, (not to be confused with the Red Fort of Delhi) was once the home of the great Mughal ruler Jalal-ud-din Mohammad Akbar and after him his grandson Shah Jahan.

Akbar order and oversaw the construction of the Fort and its walls on his arrival in 1558 from the ruins of the brick fort known as ‘Badalgarh’. 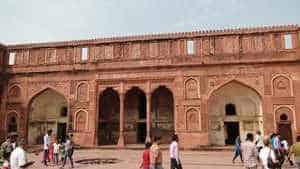 The construction lasted 8 years at the end of which the city became Akbar’s capital owing to its strategic location in the country.

Akbar not only built the walls and battlements, he also built large reception halls or ‘Durbars’ to attend to his people.

History or rather his biographer Abul Fazl, records Akbar in the kindest and grandest words as one of the fairest and most just rulers of all times.

He realised the importance of uniting the varied cultures of India and did away with discriminating between his Hindu and Islamic subjects.

He was the first Mughal emperor to introduce the practice where his loyal subjects, both commoners and the members of his royal household, could approach him directly with their problems and expect solutions and help.

He held private and confidential meetings in the former hall where only his trusted advisors were allowed and he received the petitions from the citizens in the latter hall.

This practice made him a popular and loved ruler despite being of a foreign lineage. Agra Fort remained his home till he died in 1605.

Before the Mughals claimed it as their own, Agra was the capital of Sikander Lodhi of the Lodhi dynasty.

The site of the fort remained their home till his son and the last ruler of the Lodhi dynasty, Ibrahim Lodhi was defeated by the first Mughal ruler Babur during the famous battle of Panipat in 1526.

Along with the city, Babur also took over the fort and was the first to lay the foundations of a fort in its premises, which was later completed by his grandson Akbar.

He is said to have built a stepwell within its walls. Even though Babur had conquered Agra, it did not remain under the Mughal rule for long. 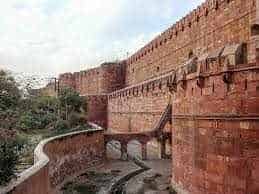 After his son Humayun’s, coronation Agra fell to Sher Shah Suri, a commander in the Mughal army and the founder of the Sur Empire in India.

In a succession of battles he cunningly fought the Mughals and forced Humayun out of India, thereafter establishing his rule.

He lived in Agra during his short imperial period of five years and even though was a brilliant strategist, Sher Shah Suri was defeated in 1545, leading to Agra being recaptured by the Mughals.

Akbar mainly employed the use of red sandstone in the construction of the Fort. Many of the monuments and palaces built by him were later torn down by his grandson Shah Jahan, who found a strange fascination with the white marble.

He found the material much more beautiful and ordered reconstruction of most of the buildings in white marble which he also used in the building of his own symbol of love, Taj Mahal. Buildings such as the Musamman Burj, the Khas Mahal, the Moti Masjid, Nagina Masjid were all built by Shah Jahan.

However, he was not the only ruler and occupier of the Fort to destroy its monuments.

When the Mughal rule came to an end due to the British invasion of India in the early 19th century, most of the buildings were destroyed by the British army, not for reconstruction but for raising barracks.

This large scale demolition has caused the Mughal legacy in the fort to dwindle down to some thirty buildings from the original five hundred, as recorded by Abul Fazl (Akbar’s biographer).

The Agra Fort is the facsimile of a small city with gardens, and buildings of its own.

It occupies approximately 94 acres of land in a semi-circular layout with the Yamuna- one of the three longest and pious rivers flowing through the planes of the Indian terrain-flanking it on the eastern side.

There are four main gates built in the walls of the Fort to close it to the dangers of invasion.

The two famous gates of the Fort, The Delhi Gate and the Lahore Gate, which is now called Amar Gate were built to fortify the crenellations and make the fort impregnable.

Amar Gate is now the only entry point left open for the tourists as a faction of the Indian Army now uses the Fort for its purposes of raising barracks.

Based on the report of the International Council on Monuments and Sites, which stated that “All of these monuments (built inside the walls of the Agra Fort) mark the apogee of an Indo-Muslim art strongly marked by influences from Persia which already manifested itself in the Timurid art”, UNESCO declared Agra Fort a World

Heritage site in 1983, in order to protect and conserve the monument from any human harm and to ensure the legacy of the Mughal rule in India

Covered by 2.5 km long enclosure walls, the Agra Fort claims the place of one of the most visited monuments by tourists in India.

People visiting Taj Mahal are drawn to this site with the promise of rich historical tales of the golden period of the Mughals.

Despite all the destruction that befell the place, Agra Fort still enjoys a legacy of one of the largest, strongest, and most loved rulers in the history of the country who made it their home instead of merely robbing it off its treasures.

They added to the beauty of the country with their beautiful gifts of monuments which makes the citizens today look at them with a feeling of pride in their eyes and respect in their hearts.

With growing ecological and cultural awareness the Fort continues to stand strong as it did in the days of the Mughals and will do for the centuries to come.