Afforestation means establishing the stand of trees or a forest in a particular open area where no one had established a tree in past.

Reforestation means reestablishment of the area under forest, it can be done by natural means (like seeding, root suckers or coppice) or by artificial efforts (by planting or direct seeding).

Forestation means establishing the growth of forest on those areas which either has forest once a while or lacked it. Both afforestation and reforestation are main categories of forestation.

Many governmental or non-governmental institutes and organizations participate directly in programs which are related to afforestation in order to create forests or to increase number of trees.

Trees help to increase carbon sequestration and carbon capture which will ultimately help to improve our ecosystem.

According to the survey in the UK, growing trees for afforestation means that it converts the legal status of that land to royal forest. Special tools like tree planting bar are being utilized to make plantation faster and easier.

Gap dynamics or Biological process is a kind of pattern which related with the plant growth which is considered in creation of forest gap.

Gap dynamics are generally known for tropical and temperate forests, which have various effects and causes on the life of forest. 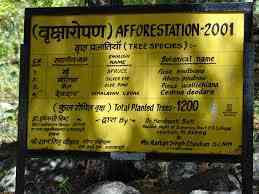 Some areas which are completely destroyed need a lot of help to reestablish because of several environmental factors.

For example, areas like arid zones, land becomes dry and inhospitable to grow new trees if forest is destroyed completely.

Other factors which cause destruction of forest are overgrazing by livestock, mainly by the animals such as cows, goats and unstoppable harvesting of the resources of forest.

Altogether will result in desertification and destruction of topsoil and without soil, no one can grow forest until the soil formation process gets completed which is of very long duration.

In tropical areas, forest removal may result in duripan and duricrust that will effectively seal off the water penetration into the soil and which prevents the root growth.

In certain areas, nowadays reforestation is becoming impossible as human beings are using this land and in other areas, duripans and duricrusts breaking is necessary mechanically in which continued and careful watering is essential.

New growing trees or plants need special protection from outer attack. It can be done by using fencing.

India witnessed a small increase in the total land area under the forest region between 1950 and 2006.

Nearly 23% of Indian land is covered under forest. The forests in India are grouped into 5 categories and 16 different types are based on biophysical criteria.

It is always under consideration that local species should be planted in an area.

Trees providing fruits to living beings and trees releasing ample amount of oxygen or sucking carbon dioxide from the atmosphere are preferred because these are major reason for living being survival.

Afforestation and its Importance

India is a developing and emerging country in which controlling the carbon emission is a challenging issue for policy makers.

As per the current scenario, industrialization is required to create jobs to tackle the unemployment among youths which helps to increase the overall GDP and per capita income.

In order to satisfy the large power plants and industries, large areas are required to set up. In past years deforestation has increased for the creating:

Some of the major advantages of Afforestation are

But if all the different areas of industries will grow at this pace then deforestation will destroy the natural habitat for animals, insects and human beings.

Afforestation is a main part in fighting against global warming, pollution, soil erosion and maintaining the ecological balance. As a responsible citizens of society we must plant at least one tree in our lives.