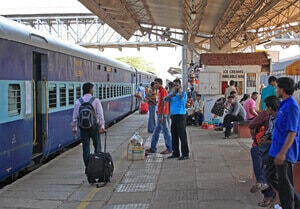 A railway station presents a cross-section of humanity at large. In a big city it is thronged with people from different parts of the country. You find them in different clothes and speaking different languages.

Last Sunday, I went to the New Delhi railway station to receive my grandparents, who live in Kolkata. I walked to the ticket counter to buy a platform ticket. There was a long queue. After half an hour, I got the ticket.

The train was late, so I walked into the waiting room. It was full of passengers. Some passengers were getting bored. They were looking at their watches every now and then. Some were discussing political issues.

Others were busy reading newspapers and magazines. At the railway station, I found most of the trains overcrowded. The condition of the passengers, travelling in them, was pitiable.
When five minutes were left for the arrival of the train, I reached the platform passengers were waiting for it.

There was at rush at the tea- stall vendors were having busy time and the coolies were roaming on the platform. Beggars were also there. Some were singing to beg. As the train arrived, passengers rushed to board it.

Many passengers got out and many more got in. coolies were carrying heavy luggage items of the passengers in or out of the compartments. Suddenly I saw my grandparents getting down. I ran towards them, their feet and came out of the station with them.